Introduction:
Quietway7 links a cycle route from Elephant & Castle (E&C) with Crystal Palace, and was routed by TfL to be via Dulwich Village, West Norwood (Thurlow Park Road), Gipsy Hill and then Crystal Palace (via Farquhar Road).

The route from E&C southbound is in Southwark (to Dulwich) then is in Lambeth (Turney Road, Rosendale Road/Thurlow Park Road, Hamilton Road, to Gipsy Hill), then goes back into Southwark (from Gipsy Hill to Crystal Palace). Southwark had their part of the quietway consultation approved.

Lambeth delayed their decision to June 2017, and was then subsequently “called in” as there was widespread concerns from both the local community and cycling groups for parts of the route. Cycling groups unanimously objected to the proposed design along Gipsy Hill by: Southwark Cyclists, Lambeth Cyclists and Wheels for Wellbeing. 70% of respondents objected to the the design on Gipsy Hill. Gipsy Hill is a busy Local Distributor Road and bus route. Gipsy Hill has “insufficient road width” for a segregated track. The original proposed design meant motor vehicles “will encroach on the advisory cycle lane” to allow oncoming motor vehicles to pass.

Gipsy Hill Options:
There are alterative options to avoid Gipsy Hill. Southwark Cyclists have supported the design option to follow LCN23 downhill all the way along Dulwich Wood Avenue and then using the other side of Long Meadow (so not using Gipsy Hill), with a new track behind the bus stop.

This design is quieter and safer than using Gipsy Hill, and avoids the proposed dangerous junction Gipsy Hill/ Dulwich Wood Avenue, near the rail station. This integrated design also allows greatest cycle access to local amenities, schools, shops, and parks in Dulwich, West Dulwich and West Norwood. There is interest and outline support from Southwark to explore this option.

Next Steps:
Lambeth are now actively progressing engagement and revised designs for their part of the route, with a new consultation process due in September. There is potential for an improved option at Gipsy Hill, but this is likely to need new additional funding from TfL.

What are Quietway?
London Cycling Design Standards, Chapter 1 (page 15):
Quietways “..are aimed at new cyclists who want a safe, unthreatening experience.” The key principles for Quietways include:
o Routes should be on the quietest available roads consistent with directness;
o Routes should be as straight and direct as possible;
o where they have to join busier roads, or pass through busy, complicated junctions, segregation must be provided;
http://content.tfl.gov.uk/lcds-chapter1-designrequirements.pdf 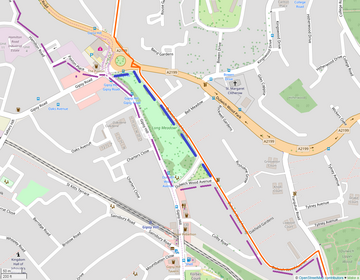