At the bottom of the hill there is a "chicane" for motor vehicles to negotiate. Northbound traffic must give priority to southbound traffic.

The chicane is formed by an island on the northbound side of the road. This island has a bypass to the left to allow cyclists to proceed despite oncoming traffic.

After a recent resurfacing of the road the markings for the cycle lane were omitted (see picture). This means that cyclists should now give priority to southbound traffic as the markings indicate they should not use the bypass. 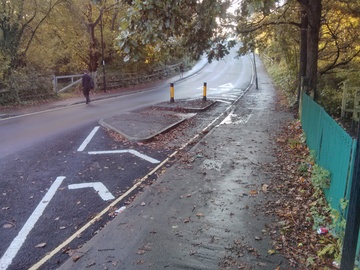